An Open Letter to Dr. Anthony Fauci | Originally Published May 31, 1988

“You care, I’m told (although I no longer believe it). I’ve even heard you called a saint… But saints have imaginations vivid enough to know how to spend $374 million in a dire emergency.” ~ Larry Kramer

The Press of Freedom: A Column Open to Our Readers

I have been screaming at the National Institutes of Health since I first visited your Animal House of Horrors in 1984. I called you monsters then and I called you idiots in my play, The Normal Heart, and now I call you murderers.

You are responsible for supervising all government-funded AIDS treatment research programs. In the name of right, you make decisions that cost the lives of others. I call that murder.

At hearings on April 29 before Representative Ted Weiss and his House Subcommittee on Human Resources, after almost eight years of the worst epidemic in modern history, perhaps to be the worst in all history, you were pummeled into admitting publicly what some of us have been claiming since you took over three years ago.

You admitted that you are an incompetent idiot.

Who Is Sean Strubs? | Author Of “Body Counts: A Memoir of Activism, Sex, and Survival” by Sean Strub

The founder of POZ magazine shares “a captivating…eyewitness account from inside the AIDS epidemic” (Next) and “a moving, multi-decade memoir of one gay man’s life” (San Francisco Chronicle).

When the AIDS epidemic hit in the early 1980s, Strub was living in New York and soon found himself attending “more funerals than birthday parties.” Scared and angry, he turned to radical activism to combat discrimination and demand research. Strub takes you through his own diagnosis and inside ACT UP, the organization that transformed a stigmatized cause into one of the defining political movements of our time.

Whitewashing AIDS History | Dr. Anthony Fauci Is Rewriting History To Disguise His Shameful Role In Delaying Promotion of an AIDS Treatment That Would Have Prevented Tens of Thousands of Deaths In The First Years of the Epidemic.

In my book, Body Counts, A Memoir of Politics, Sex, AIDS, and Survival, I recount how slow the federal government was in publicizing the use of Bactrim and other sulfa drugs to prevent PCP (the pneumonia that was then the leading killer of people with AIDS) in addition to its long-time and well-known use to treat PCP. 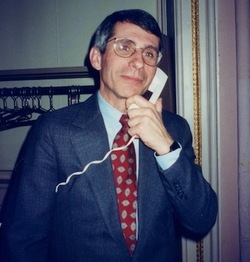 I point to Dr. Fauci in particular, because he was, and remains today, the head of the National Institutes of Allergy and Infectious Diseases and the head of the federal government’s AIDS research program. In 1987, pioneering AIDS activist Michael Callen begged Fauci for help in promoting the use of Bactrim as PCP prophylaxis and issuing interim guidelines urging physicians to prophylax those patients deemed at high risk for PCP.

Fauci has taken exception to my account of the incident. In comments to The Washington Blade, he offered his version of the story.

“So what actually happened is that Michael came to me and said you know there is this preliminary activity and some small trials that Bactrim works,” Fauci said. “Would you come out and make a guideline to say it should be used by everybody. And I said ‘Michael I can’t do that but what I can do is help design and make sure that the grantees that we fund do a clinical trial in Bactrim to prove or not that it was safe and effective,’” he said. “But I didn’t blow him off and say I don’t want to issue guidelines. The fact is that’s neither within my purview nor within the responsibility or authority I have to issue guidelines.”

Whether Fauci personally had this authority or not isn’t the point. His excuse would be laughable if it wasn’t so tragic; he was constantly traveling and speaking to the media and opining about everything related to AIDS research and treatment. In Arthur Kahn’s book, Winter Wars, Larry Kramer pointed out that to get an appointment with Fauci, one didn’t call his secretary but his press officers, “who book [his] talks and interviews… like movie stars.” He could easily have advocated awareness of the preventive treatment, as the de facto federal AIDS Czar, his influence was and is enormous.

Had Fauci listened to people with AIDS and the clinicians treating them, and responded accordingly, he would have saved thousands of lives. In the two years between 1987, when Callen met with Fauci and 1989, when the guidelines were ultimately issued, nearly 17,000 people with AIDS suffocated from PCP. Most of these people might have lived had Fauci responded appropriately. 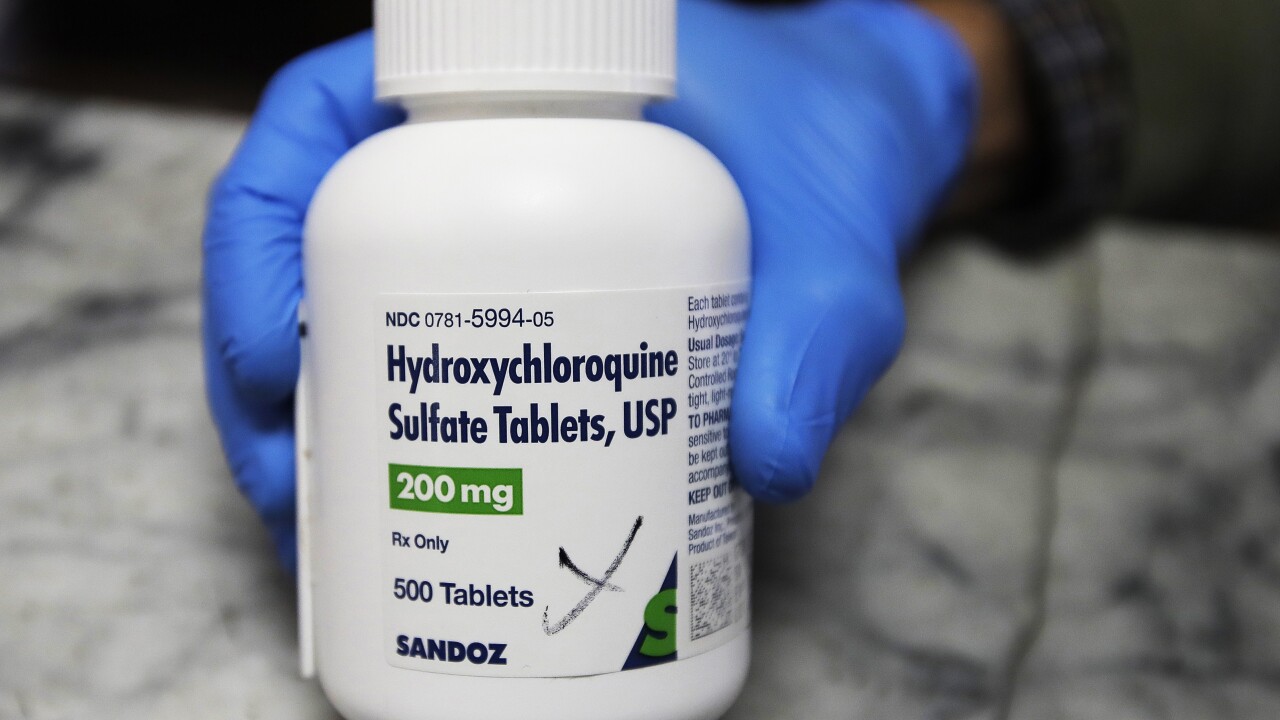 FILE – In this April 6, 2020 file photo, a pharmacist holds a bottle of the drug hydroxychloroquine in Oakland, Calif. Results published Wednesday, June 3, 2020, by the New England Journal of Medicine show that hydroxychloroquine was no better than placebo pills at preventing illness from the COVID-19 coronavirus. The drug did not seem to cause serious harm, though – about 40% on it had side effects, mostly mild stomach problems. (AP Photo/Ben Margot).

(WXYZ) — Doctors at Henry Ford Health System penned an opened letter on the hospital’s study of hydroxychloroquine being used to treat COVID-19.

It comes just days after Dr. Anthony Fauci called the study “flawed” while testifying in front of a House subcommittee.

Unfortunately, the political climate that has persisted has made any objective discussion about this drug impossible, and we are deeply saddened by this turn of events. Our goal as scientists has solely been to report validated findings and allow the science to speak for itself, regardless of political considerations. To that end, we have made the heartfelt decision to have no further comment about this outside the medical community – staying focused on our core mission in the interest of our patients, our community, and our commitment to clinical and academic integrity.

The Story Behind the First AIDS Drug

oday, if someone is diagnosed with HIV, he or she can choose among 41 drugs that can treat the disease. And there’s a good chance that with the right combination, given at the right time, the drugs can keep HIV levels so low that the person never gets sick.

That wasn’t always the case. It took seven years after HIV was first discovered before the first drug to fight it was approved by the U.S. Food and Drug Administration (FDA). In those first anxious years of the epidemic, millions were infected. Only a few thousand had died at that point, but public health officials were racing to keep that death rate from spiking — the inevitable result if people who tested positive weren’t treated with something.

What the U.S. officials learned during their visits concerned them so much that they dispatched two diplomatic cables categorized as Sensitive But Unclassified back to Washington. The cables warned about safety and management weaknesses at the WIV lab and proposed more attention and help. The first cable, which I obtained, also warns that the lab’s work on bat coronaviruses and their potential human transmission represented a risk of a new SARS-like pandemic. (Paragraph 3)

‘We Loved Each Other’: Fauci Recalls Larry Kramer, Friend and Nemesis

In public, the activist berated the infectious disease expert for federal inaction on AIDS. But their affection lasted decades and changed the course of the epidemic.

This project seeks to understand what factors allow coronaviruses, including close relatives to SARS, to evolve and jump into the human population by studying viral diversity in their animal reservoirs (bats), surveying people that live in high-risk communities in China for evidence of bat-coronavirus infection, and conducting laboratory experiments to analyze and predict which newly-discovered viruses pose the greatest threat to human health.

Dr. Anthony Fauci is an adviser to President Donald Trump and something of an American folk hero for his steady, calm leadership during the pandemic crisis. At least one poll shows that Americans trust Fauci more than Trump on the coronavirus pandemic—and few scientists are portrayed on TV by Brad Pitt.

But just last year, the National Institute for Allergy and Infectious Diseases, the organization led by Dr. Fauci, funded scientists at the Wuhan Institute of Virology and other institutions for work on gain-of-function research on bat coronaviruses.

In 2019, with the backing of NIAID, the National Institutes of Health committed $3.7 million over six years for research that included some gain-of-function work. The program followed another $3.7 million, 5-year project for collecting and studying bat coronaviruses, which ended in 2019, bringing the total to $7.4 million.
Newsweek Newsletter sign-up >

Many scientists have criticized gain of function research, which involves manipulating viruses in the lab to explore their potential for infecting humans, because it creates a risk of starting a pandemic from accidental release.

SARS-CoV-2 , the virus now causing a global pandemic, is believed to have originated in bats. U.S. intelligence, after originally asserting that the coronavirus had occurred naturally, conceded last month that the pandemic may have originated in a leak from the Wuhan lab. (At this point most scientists say it’s possible—but not likely—that the pandemic virus was engineered or manipulated.)